Make Your Own Free Ranger

With lots of people at home at the moment, we thought we could give those who fancy taking up a new hobby some inspiration.

We’ll be publishing a recipe from our very own cookbook A Pie For All Seasons every weekend to give people a taste of Pieminister from the comfort of their own home.

For those who aren’t quite up for experiments in the kitchen, you can always order our pies straight to your front door.

So here is our first recipe: The Free Ranger. A chicken, cider and leek pie perfect for springtime.

For the short crust pastry:

For the rough puff pastry:

First, make the short crust pastry. Sift the flour into a bowl and add the salt. Add the cubes of butter and rub them into the flour with your fingertips until the mixture looks like breadcrumbs. Gradually stir in enough cold water to make a pliable but fairly firm dough. Knead lightly for 30 seconds or so until smooth, then wrap in clingfilm and chill for at least 30 minutes before use.

Next, move on to the rough puff. Put the flour and salt into a bowl and add the cubes of butter. Mix the water with the lemon juice, then add about three-quarters of it to the flour mixture. Stir briefly until everything comes together into a rough, shaggy dough, adding the remaining water if necessary. Place the dough on a floured board, press into a square, then roll it out into a long rectangle about 8mm thick. Don;’t turn the pastry while you are rolling, but be sure to lift it up and flour underneath if it begins to stick.

Fold up the bottom third of the pastry, then fold down the top third, like folding a letter. Give it a quarter turn and roll it out again – it’s best to work quickly and lightly so the butter doesn’t warm too much. Fold in three again, wrap in clingfilm and chill for 20 minutes. Repeat the rolling and folding twice, then wrap again and chill thoroughly before use.

While your pastry is relaxing, you can make a start on the filling.

Put the chicken in a large pan with the carrot, celery, half an onion, the garlic bulb, two of the tarragon sprigs and a little salt. Add enough water to almost cover the chicken. Cover the pan, bring to a simmer and cook very gently for about 45 minutes, until the chicken is cooked through. Leave until cool enough to handle, then remove the chicken from the pot. Strain the chicken stock into a clean pan (discard all the vegetables except the garlic) and boil until reduced by half – the flavour should become concentrated. Meanwhile, take the skin off the chicken and discard. Tear the meat into shreds.

Cut the rest of the onions into a medium dice. Melt the butter in a pan, add the onions and cook until translucent. Add the leeks and cook until softened. Pour in the cider and simmer until reduced by about half. Stir in the flour, cook for a few seconds, then add 400ml of the hot chicken stock, plus the cream and the lemon zest. Bring to a simmer – the mixture should have a nice, creamy pouring consistency Add a little more of the hot stock if necessary. Chop the remaining tarragon and add to the sauce, then remove from the heat. Squeeze in the flesh from the garlic bulb and stir in the chives and chicken. Season with salt and pepper and leave to cool.

Preheat the oven to 180°C • 160°C fan • 350°F • Gas mark 4. Roll out the shortcrust pastry on a lightly floured surface to about 3mm thick and use to line a large ovenproof dish, such as a baking tin or lasagne dish. Fill with the chicken mixture and then brush the pastry edges with a little beaten egg. Roll out the rough puff pastry to about 3mm thick and use to cover the pie, trimming off the excess and pressing the edges together to seal. Brush with the egg glaze and make a couple of small holes in the centre of the pie to let out steam. Leave to stand for 10 minutes, then bake for about 30 minutes, until golden brown. This pie is great served with roast potatoes and spring greens. 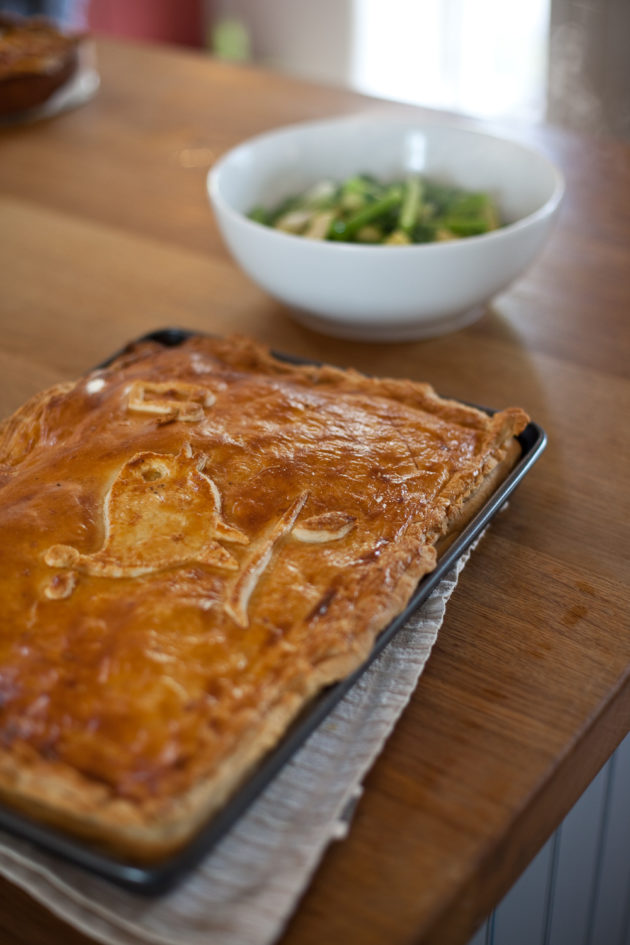